The town had a turbulent history up to 1651 in which year the Venetians razed the buildings left standing after the great earthquake of 1508 and the subsequent raid in 1538 by the infamous Barbarossa.

It was rebuilt on the site of the ruins in 1870 and called Avnie, a name which was rejected by the people who preferred the name Sitia, thus maintaining their links with the past.

Upon the arrival of the Byzantines it became an important commercial port and remained so up to and throughout the early Venetian era. 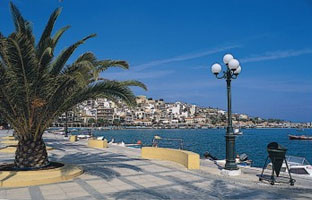 The Venetians described Sitia as "the radiant focal point of the island" (maximum statum et lumen insulae) and refer to it in Regno di Candia as a major commercial hub for the East and Africa. The Venetians stamped their authority by building many fortresses in areas of strategic importance, most of which can still be seen today.