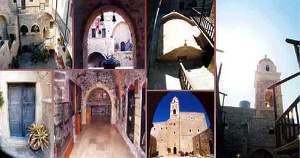 Moni Toplou is a Monastery with a long history which played a significant role in the struggles of the Cretan people for freedom.

In 1654, during the Turkish Occupation, the first bishop of Crete, Neofitos Patellaros, handed over some Cretan monasteries to the Patriach. In 1704 the Monastery of Toplou thus managed to avoid the heavy taxes and land seizures enforced on the Cretan people by the janissaries of the Turkish Occupation.. In 1798, the Patriach of Constantinople, Gregory V, declared the monastery and its surrounding lands to remain "uncultivated and undisturbed" and forbade its sale without the express permission of the Patriach.

The monastery is dedicated to Our Lady and to St John. The monastery is now run by abbot Filotheos Spanoudakis who has presided over the restoration of the monastery and founded a museum of icons and copper engravings. The displays include icons of great artistic worth, bibles, gold-plated silver crosses, patriachal documents, lead seals, vestments etc. The dining area has recently been adorned by the icon painter Manolis Betinakis using fresco.